The California Alliance for Arts Education’s Student Voices Campaign had an exciting and successful year of student advocacy with over 200 participants from 15 schools across California. Five outstanding films were showcased at the Youth Creativity Summit in Los Angeles. The Summit consisted of multiple elements, from immersive workshops to engaging panels, all with the goal of connecting participants to their own creativity. Young people engaged in a series of creative problem-solving challenges, heard from creative professionals about their paths and goals, and most importantly, told their own stories. The award-winning film makers had their films premiered not only in front of an audience of 300 peers, but also creative industry professionals and working artists. 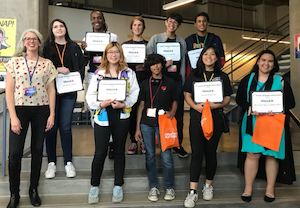 The Student Voices Campaign also had the honor of contributing to an episode of Inside California Education, a public television series that explores the challenges, issues and stories of public education. The episode was aired across California, but you can check it out online at any time: Advocacy through Video.

Learn more about this campaign on the California Alliance for Arts Education website.